Continued from Prelude in C Major.

I went to bed very early the Friday night before the race, extremely nervous for what lay ahead, calves still aching after our short stint on the Wall the day before. I woke up at 1am (wake-up call wasn’t until 3am), and couldn’t go back to sleep. But the moment I woke up, I knew I would be fine. I was ready. My mind was in a good place, my stress had disappeared and I was looking forward to the experience of a lifetime. My bags were packed, gear sorted out and my hydration pack filled.

Before breakfast I foam-rolled my calves and my butt (to ensure a firing butt, heaven knows we can’t afford a butt that doesn’t fire). Breakfast was at 4 am and, although I didn’t have an appetite at that time I knew fueling would be key to a possible 6 or 7 hour taxing run in high heat and humidity. I hydrated well the day before and had enough water during the few hours before the race as well. Luckily the coffee in China wasn’t very much to my taste so water it was.

At 5 am we all piled into our respective buses for a 1.5 hr drive to the start of the race. There was a quiet tension in the buss, the atmosphere loaded with adrenaline. I listed to my race day playlist and the familiar songs calmed my nerves.

Once we arrived most of us lined up outside the bathrooms for the last calls of nature. I met the two Running Rhinos from South Africa, Bradley Schroder and Greg Canning, who each ran (and successfully completed) the Great Wall Marathon wearing a 10 kg Rhino suit. Their campaign raises funds and awareness for rhino conservation.

While shivering in the morning cold (although I knew it wouldn’t last…), the lady next to me in the bathroom line (accidentally) started talking to me in Afrikaans, and great was her surprise when I replied in the same language! Turns out she also hails from neighbouring South Africa and was in China for her very first marathon. We shared a little gossip about how awful we found those plastic bathroom ‘doors’, most probably the breeding ground of all unthinkable kinds and numbers of germs!

While all athletes were bunching to their various starting areas, we were entertained by a beautifully uniform-clad Chinese orchestra playing lively tunes, including Jingle Bells (?), much to everyone’s delight and entertainment (during the run some villagers also cheered us along with what I suspected was their only English: Happy New Year!) Bless them.

The race had a staggered start, with the faster runners (marathon and half-marathon) starting in the first wave at 7:30 am. I was in the second of four waves (I may or may not have put up a goal/dream marathon time during race entry, always be positive!) that landed me in the early wave…

And then we were off! The first kilometer was a relatively flat one, after which a winding ascent of about 5 km on tarmac lead to the entrance of the Great Wall. From there we covered a roughly 3 km section on the Great Wall from west to east, including 2550 steps (according to the step-counter on another athlete’s watch the steps were way more than that… but who’s counting?) The steps were really steep in some cases (both going up and down), and in other sections they were so tiny and broad we had to run them two by two. Okay I just put ‘run’ in there for fun. I didn’t actually run the steps. I suppose there were people who ran them, but I definitely didn’t. I moved quickish. Many parts of the Wall were really too steep and treacherous to run on, and the flatter parts I mostly used for recovery. And meeting new people. And taking in the absolutely breathtaking wonder of the surroundings and the remarkable structure that is the Great Wall. 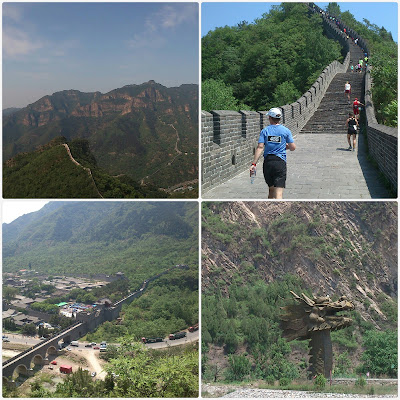 After descending the NOTORIOUS Goats Track we passed through the Yin Yang Square to great cheering of the supporters. The MC also announced that I was the second Namibian to pass the square that morning, but sadly I never got to meet my fellow countryman/lady. Then off to the country side we went as the temperature and humidity started to rise. I carried my own hydration pack, but there were plenty of aid stations offering bottled water, energy drinks as well as bananas in some places. It was really hot, and I was very cautions of heat exhaustion . I took in a lot of fluids, even refilled my hydration pack at some point, but also took electrolytes and three Slow-Mags along the way to prevent cramping. And it definitely paid off.

From the route profile I expected the small hill in the country-side section to be insignificant (compared to the Wall), but it turned out to be another nice, long climb but with less of a view. The villagers were friendly and cheering us on, with little children clapping and giving high fives all along the route. That was really moving, and reminded me of my two babies back home and how they always high-five runners when they support a race. 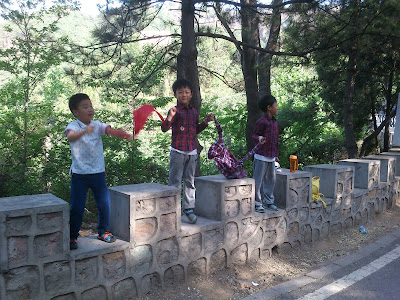 The sections between villages were hot and tiring, and at some point I reverted to my music for some inspiration. There usually comes a point during any race where I start to focus more on my tired body and less on the driving will to finish the race in a decent time. Before long I end up strolling and finding excuses not to run even if I feel rested again. That is where I find music to be of a great relief, to get my mind off the current task and get me moving again. During this run the thought of the two Running Rhinos constantly inspired me; people that are willing to endure a lot of physical discomfort for the greater cause. The plight of the critically endangered rhino is also very near to my heart, and the focus of a fund raiser run/cycle event that we organise in our home town.

After the loop in the country side the marathoners returned to Yin Yang square, so passing there a second time after the start, and I recall the prize giving had already started. When I passed the square after the 8.5 km run on the wall the first time I heard the MC announce that the first lady on the 21 km entered the square with me… Ha, well I guess there were people running a bit faster than me!

Nevertheless I still felt strong as I headed towards the Goats Track to tackle it from bottom to top this time as we ran the Wall from east to west. (I said run again…) That goats track was one difficult climb, I must say, and I passed a lot of runners sitting or laying down on the steps, shoulders sagged with very far off gazes in their eyes. I talked to all of them, offering water, and they all seemed to just be tired but not defeated.

During this last section on the Wall I just kept moving, albeit slowly, and actually talked to a number of interesting people, which made it one of the most memorable sections of the race. I happened to meet up with Henrick Brandt who has completed every one of the Great Wall Marathons since it’s inception in 1999. His first Great Wall happened to be his first marathon, and thus he keeps returning every year.

After we stepped off the wall I had to remind myself that I was actually in a race and should start running again. The final seciton was the 5 km covered in the start of the race, which was now downhill. Ironically a lot of people told me afterwards that this was the hardest part for them. I think mentally you feel you should be done after completing the hard part, which is the second round on the Wall, and 5 km just was far on tired legs.

When I entered the Yin Yang square for the 4th time, it was to massive cheers from the audience (always nice to finish late, there are many people to cheer you on!) I finished in 6:29 which I was quite happy with, with plenty time left to the 8 hrs cutoff. I was immensely happy to receive my beautiful medal, as I felt I worked for it long and hard and often doubted if I would be able to accomplish this huge goal.

All runners received a complimentary ticket for a massage after the race. I hung around the physios’ tent for a while observing the agony on their poor patients’ faces, thinking to myself that the Chinese were out to get us… those whom they didn’t destroy on the Wall they ould finish off with a brutal massage! Then one of them grabbed my ticket from my hand and, wickedly smirking, directed my to a bed. I though this was it, they are going to break me! Sure enough the lady was quite forceful but it felt good in so many ways, and I can honestly say that between my Slow-Mags and my Chinese physio-sergeant I didn’t have any major aches or pains the next day!

We were transported back to Beijing after the race, most of us (world-travelling adult athletes) only took our medals off once we got to our hotel rooms in Beijing, 3 hours later. All of us SO proud of what we have achieved and experienced that day.

Race week was aptly ended with a gala dinner at a very nice hotel in Beijing on the Sunday night. The food was delicious, everyone was relaxed and friendships were made. The organizers showed a video of the event on a large screen, and reliving some special moments of the days before stirred some emotion in all of us as we knew our adventure was about to end.

All in all I have to commend Albatros Adventure Marathons for a superbly organised race. From our arrival and reception in Beijing, our sightseeing tours, transfers to Jixian and the Race to the last morning where they organised transport for each of us to the airport to catch our various flights, all went smoothly and was SUCH a big adventure. I can most definitely recommend the Great Wall Marathon to anyone who seeks to run a superbly organised, VERY scenic yet TOUGH international race.

Prelude in C Major: days leading up to the Great Wall Marathon 2016.