Maybe not as soul-stirring or profound as Clarissa Pincola Estes’ Wolf-running version, but to this running lady it comes preeeetty darn close.

See, we’ve been running for longer than we have been raising and loving pups. And in the past 10 years or so we have tried and tried and kept loving and trying to stay patient, but running with our four-legged chidlers, with leashes or without, just never was any real fun. The Jack Russel really, REALLY wanted to run, oh yes. As soon as he saw any indication that we were even LOOKING at our running shoes, he approved with his high-pitched, incessant barking, quivering with excitement.

For the first 500 m of our seaside runs, Jack had to be on a leash, which we would take off once we hit the beach. If we survived the 500 m being dragged by what felt like a rabid kudu, an extended mandatory walk break would follow (for the human). Jack, of course would then celebrate his newfound freedom by flying off miles out ahead, scaring every biological being on the beach, from non-suspecting bird life to poor peaceful fishermen. So in the wake of this embarrassment the human would start running again sooner than the dragged-legs could recover.

Unlike other normal runners (or runners with normal dogs?), our beach running had to take place ON the beach. On the deep, sandy and bouldery section, and not on the compact walkway a few yards in. All this just to try and keep Jack from picking a fight with every other dog. Tiny woolly ones, rottweilers or boerboels were his favourites. Attacks on the woolly ones would usually entail an ears-down-tail-tucked-in run down of his victim, followed by a dusty brawl, while the hysterical owner (usually female), lashed out at us for not keeping our vicious dog on a leash. Luckily there was never any (serious) blood shedding (that we are aware of).

Attempted attacks on the larger canines would usually entail a nervous, flat-eared Jack going in for the kill without any pleasantries, straight for his opponent’s throat, his irate prey just lifting his head away to avoid scarring. Often times WE ended up being the hysterical party, trying to call off our silly pup, not looking forward to what may have followed if the big dawg lost his or her temper.

Or Jack would just run. And keep on running without looking back. And we would get the all too familiar phone call from a kind stranger or the SPCA to come fetch our dog. That happened all too often. We met many new people like that.

On the complete opposite side is our big yellow Lab. Umfaan turned 10 this year, but he is every bit as cute and clumsy as he was at 6 weeks when we got him. Loving, caring and very attached to his humans. He always wants to be within 5 cm of us, or closer, if possible. So much so that, when he runs with us he will either step on our heels when he is following, or stop dead in his tracks when he is leading, turn sideways to check if we are coming, causing his human to stumble or jackknife over him. He just doesn’t have personal space, and we love that about him. But not during a run.

And then there was Denali. The first puppy we had since the boys were born. Shortly after he came to stay with us I noticed that this pup was really very sensitive and bright. He could play a decent game of fetch before he was 3 months old, actually dropping the ball for his human to throw again (Umfaan would keep it, Jack would eat it. No comparison, we love our fur-boys equally, but eish, have we bought balls the last 10 years!)

About two months ago, when Denali was 6 months old, I started to take him on short runs with me. At first he was a little skeptical, not really sure what the point of the running without a ball or a short-term reward was. But we kept at it, running with him for short distances about once a week. Sometimes he needed a lot of encouragement. He would stop dead in his tracks while I ran out ahead. I would call him, praising him, to which he would respond very enthusiastically. So much so that he would come sprinting, leaping up on my unsuspecting calves (and later, as he grew taller, my lower back) in mid stride, sending his shocked human forward in a lunge or a crouch.

Well, after two months I can happily report that the 8 month old pup is a running dawg now. He gets it, and he loves it! This week he ran with me three times (only 5 or 6 k’s at a time) and he also did some hill repeats with the hubs. He was an absolute star.

He is still very young, so obviously we don’t want to exert him too much too fast, but for now we both really love our shortish runs together. His quiet, happy and oh-so-grateful companionship is such a tonic. For the first part, as we run out, he usually follows me, staying in my tracks, a step or two behind me. On the return trip he usually leads, right in front of me. Sometimes I try to run next to him, but he just scoots over to my side again. He wants to lead. And he doesn’t take too kindly to walk breaks. He has his own steady pace and you better keep up, my Lady! 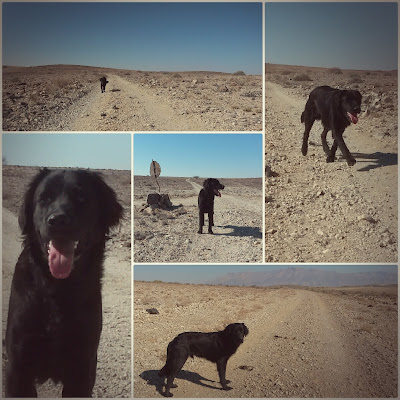 This morning as I headed out I called Denali and he didn’t seem to be in the mood for running, just watching me leave over the hill. After about 5 minutes or so I heard footsteps behind me, skrikking me in a tizz, only to turn around to his friendly, panting black face (he is so black that my camera can’t focus on his face if his tongue isn’t hanging out!) He ran after me for about a kilometer or so, all on his own. I couldn’t be more proud.

So after all these years of trying and trying and hoping and giving up, we are finally Running With The Dawgs. And we absolutely love it!