It has been more than 6 weeks since I completed the Otter African Trail Challenge, but to date I have not been able to get this race report out. Sure this draft has been sitting in my computer for 5 weeks now, but as per usual, I find it incredibly hard to pen down words to aptly describe a life altering experience such as the one that was The Otter. My usual flirtations with the same old three or four adjectives all look shallow and nondescript when I reread this; not at all reflective of what I carried away from this experience. This is also the reason why I couldn’t bring myself to write/recite my own wedding vows for our wedding day, and why our sons’ birth posts are also still in draft format, some five and three years overdue. My words just don’t feel beautiful enough.

But, nevertheless, I will give it a shot. I may not be happy with the final product, but some idea of the experience will at least be shared with those who care to read.

Truth is, my head and my heart still lingers in that Forest. I close my eyes and I am right back there, every time as vivid, with only the sounds of my footsteps and rhythmic breathing, the forest quiet, alert, acutely aware of my passage. Skittish creature eyes watching. A cheeky lone Grey Loerie calling ‘kokok! kokok!’

I met a part of myself in that forest that I haven’t known before.

The Otter African Trail Run is known as ‘The grail of Trail’. It is apparently one of the most popular and toughest marathon distance trails in the world, and also one of the most beautiful and pristine, which is why most people absolutely love the trail, whether it is to hike or to run it. Ryan Sandes, the South African professional trail runner, noted in his book that if he had to choose only one trail to run for the rest of his life, it would be the Otter.

The Race is incredibly well organised by the deeply passionate team from Magnetic South, founded by brothers Mark and John Colins (of Camel Trophy fame… yes, there were Land Rovers!), assisted by South African National Parks (SANPARKS) members and sponsored mainly by Salomon and GU.

We arrived at our cozy little cabin in Stormsrivier Village at mid-morning on the Wednesday, and settled in before we headed over to Storms River Mouth for race registration and mandatory gear check. The vibe at race village was incredible, the setup huge and the organisation really impeccable. I received my yellow and black race bib, my dibber (timing device), an awesome Salomon Otter race shirt and a goody bag to die for! Seriously, I have not received a goody bag of this caliber (yes, we LOVE our race goody bags!) When I saw a travel size of ‘Ouma Hanna’s Boerseep’ I almost wept. I have been importing Ouma Hanna’s soap from SA since 2012 for use on my sons’ laundry. This goody bag had my name on since day one!

After a yummie lunch at the local Park restaurant, it was time for me to get to know what was waiting for me the next day… it was prologue time. All athletes have to complete the prologue the day before the race for seeding purposes. It is a distance of just under 5 km over terrain pretty much representative of the Otter trail itself. I averaged about 10 minutes a kay over the short route of numerous short steep hills, protruding tree roots, rocks, streams and steps. Not your average run in the park! Since I really had no illusion of my fitness levels going into this, I opted to take it real easy and tread carefully, which by no surprise landed me very close to the back of the pack on the seeding list. It was part of my self-preservation strategy, so I was content. 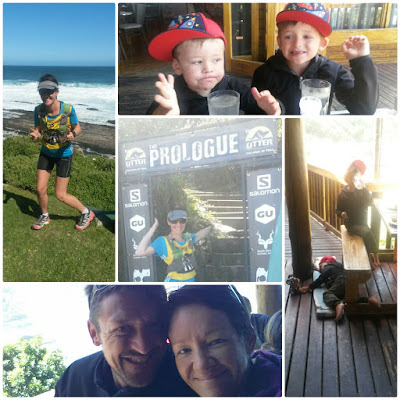 Race day arrived and apparently for the first time the Challenge had beautiful weather. Temperatures were mild and luckily we had no rain. The Abangeni (fastest group of contenders for the podium) set off at 6 am from the beautiful beach of Nature’s Valley. I had Nico and the boys there to keep me company until my name came up, which kept my nerves in check. Runners were sent off in groups of 4 according to their seeding times at 30 second intervals to avoid congestion.

The first 2 km was the only flat section on the entire race, following the beach line to the actual start of the Otter trail. People were chatting nervously or just kept quiet, like me, wondering if it would be OK to take the first walk break. I felt chuffed and instantly fitter when I saw the first guy slowing down for a walk, only to later see him sit down and nurse his heavily bandaged ankle. So much for that little victory.

After the beach section we hit the Otter in full brute force, facing the first set of numerous sets of stairs straight out of hell. In my life I have never experienced so much cursing during a race. Thank heavens most of the time I was beyond earshot of anyone. The hills just seem to never ever stop. And once you peak, calves and hamstrings throbbing, the landscape drops straight down again into the pits of the earth’s deepest core. And you guessed it. Only to go back up again. And so on and so forth. The Otter bears a trail factor of 2 (i.e. multiply the trail distance by 2 to get the equivalent of the required effort on road), over 2600 m of elevation gain, 4 river crossings and at least 11 significant climbs (depends on who’s climbing), according to the website.

After about 10 km we hit Bloukrans River, which proved to be a non-event this year as the river and tide was really low. With all the race volunteers and Sanpark rangers there the vibe was very friendly and exciting and I really wanted to stay a while longer when one volunteer offered me some coffee. I was tempted! River entry was via a slide, and very unladylike I sploshed into the waist deep water and sufficiently dunked my entire kit, drowning my ‘zip-locked’ mobile phone. I crossed the remainder of the river calf-deep and from there had to run with water sloshing from my shoes, but that wasn’t as bothersome as I had feared.

The GU munchie point marked half-way, and by that time I was completely knackered. I have enough marathon experience to know not to trust myself and the pain or exhaustion perceived between the 17 and 22 km mark, but MAN, I was dead on my feet at this (the only) aid station. Thank heavens the Munchie point was much less of a spa treatment than what I had thought and hoped for, and more a snack-on-the-go pitstop, becaue I am pretty sure had I sat my tired bum down on a camp chair they may have had to helicopter me out of there. We promptly filled our water bladders, grabbed some fruit, nuts and GU and was gone again in 5 minutes. Only to be faced with ‘Jou Ma se Trappe’ right after crossing the river. I wish I had a picture of this little sign at this Mother of a Stair Case, as it was SO  apt after that little break, and had me in stitches for a long time after overcoming it.

The route is an incredibly beautiful mix of  scenery and varying terrain. Longer sections of running in the forest is alternated by sections through the fynbos in full sunshine, traversing jagged rocky cliffs, negotiating bouldery beaches or crossing shallow rivers. The only flat (less interesting but immensely beautiful) section was the first 2 km of beach run on the Retto course.

As planned (dictated by my late application of race training), I stayed pretty much to the back of the pack, power hiking up the stairs, running the flat tops and bottoms and sort of trotting down the stairs and over rocks and boulders at a safe pace. I was determined to finish the race within the allotted time, come hell or high water (and did they both come…). At Scott Hut, the race officials informed me that I was within 10 minutes of the cut-off for that point. I was relieved, but definitely not out of the woods, so to speak. I felt sorry for my fellow runner, a much older gentleman, who was receiving treatment by a medic, and who ended up not completing the remaining 13 km after coming so far.

It was just after Scott that I realised I had GPS issues. According to my Suunto I had about 4 km to go instead of 13. I figured it was due to the dense tree canopy, and because I had set my watch on a less accurate GPS setting in order to extend the battery life (which was totally moot, since my Ambit Peak 3 battery can last easily up to 50 hrs in the most accurate GPS setting). Expensive lesson!

According to the pacing band for a sub-11 hour run one should allow yourself 2 hours for the 5 km from Ngubu hut to the finish. I reached Ngubu with only 1 hr 40 min to spare and no idea about what the route up ahead held in store (it is hectic) and without a trustworthy GPS to guage my progress. I had to seriously haul butt if I wanted that medal!

Passing a fellow runner on a very muddy, slippery section of the trail I slipped and possibly pulled a glute, which really hurt, but I pushed on hard, making the most of the downhills and really dug deep into what I had left. When I thought it could really not get any tougher, the last 5 km on the Retto course really rose up to challenge my limits, but I had already come so far, I couldn’t back down.

The last 800m or so was easily the best (possibly fastest) run of my life, finally finding myself on some level ground again with the bright, awesomely beautiful yellow finish line up ahead of me. Hearing some friendly voices calling my name, encouraging me on and to realise they are two fellow Namibians and Rhino Runners was such a treat! A few meters on my handsome Hubs and beautiful boys were waiting to escort me across to the lawn to the finish. We crossed the finish line with 10 minutes to the final cut-off, I made it. I was done. I could rest. Tears of utter relief! 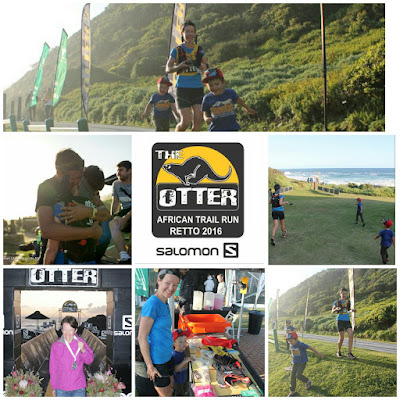 After another gear check I was off to an awesome massage, compliments of the Hubs (who was uber relieved that I finished in time… for his own safety, of course). This was by FAR the best birthday present ever, thank you so, so much my dearest Hubs.

PS. Don’t you dare do it ever again, Nico Scholtz!
PPS. I know you know I entered myself again for the Otter 2017… I simply can’t wait!